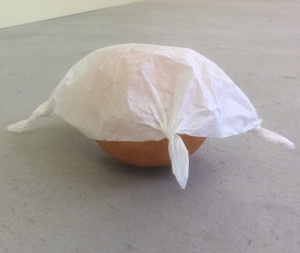 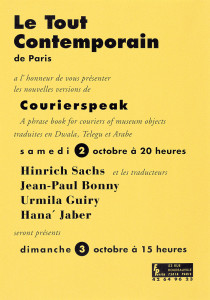 A poster announces an event, for which guests from Cameroon, India, and Lebanon were invited to orally translate excerpts from Courierspeak, a phrase-book for couriers of museum objects. 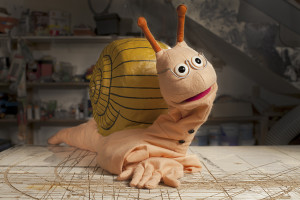 …aims at mediating the history of French
public TV from a contemporary perspective, by featuring Trépido, a gentle, mindful and witty snail character from the former children’s program 1, Rue Sesame. 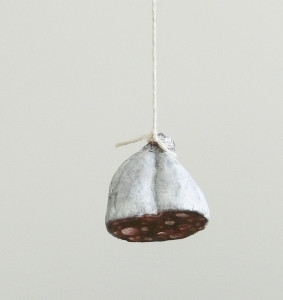 On an autumn day, within the context of prepa-
ring for an exhibition project, I was standing in an empty factory building in Geneva. The changes associated with the Berlin Wall were still a thing of the future. As I wandered among the regularly spaced columns on the vacant factory floor, I could not help but think of a number of criteria for exhibition spaces presented as necessities: solid walls, the white of those walls, entrances, series of adjoining rooms, and their influence on the act of exhibiting. At that moment it became clear that my own contextual perspective was very much bound up with a booklet Zaugg had published two years previously. In the recurring debate over whether architecture is the artist’s ally or his adversary, or whether, in view of the givens, one would simply could-shoulder it, I have often brought up the incisiveness of the text by Rémy Zaugg. Because that text is an artistic work which intervenes in precisely the debates that characterize the history of the development of artistic practices in and with architectural space to the present day.

Dreaming to Point Out a Situation. An Afterword 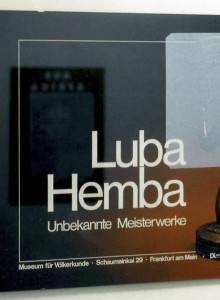 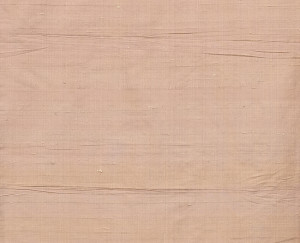 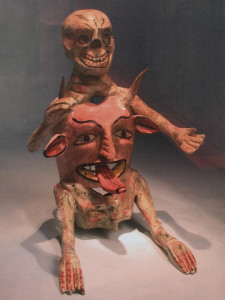 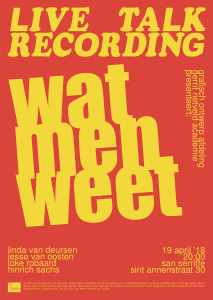 A poster announces an event, for which guests from different professional backgrounds are invited to a public debate in relation to a complete set of the international editions of ELLE magazine. Franchised around the world, the issue of ELLE on display appears in its today 32 different regional editions, all published in the same month.

That We Know / Ce qu’on sait / Was man weiss